If you’re like me, you’re thoroughly sick of seeing the sweet, pubescent face of Nicholas Sandmann as he stoically exercises his “right” to encroach on the personal space of Vietnam vet and Native American elder, Nathan Phillips, and smirk in his face. 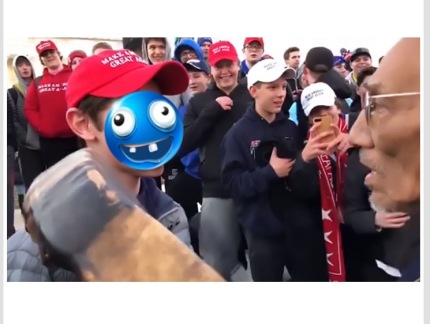 You’re probably also emotionally spent from indignation over this Catholic boy’s brazen display of disrespect for his elders, especially one who served our country during a war, and that it seems his parents didn’t teach him the virtue of humility. But what’s been overshadowed by this MAGA-hat(e) incident is the actual reason why Sandmann and his classmates were in Washington DC: to protest abortion rights. This begs the question of all religion-based high schools: What lessons are they really teaching our impressionable adolescent males?

I find it disturbing, in a Handmaid’s Tale kind of way, that schools like Covington Catholic are teaching teenage boys that they have the right, even the responsibility, to tell grown women what they can and can’t do with their own bodies and their own futures. And that this particular school sponsored a field trip so that the boys, our future leaders, can practice applying the theory of this “right” in a real-life setting.

I can’t help but wonder does the imparting of knowledge like this lay the groundwork for these teenage boys to grow up believing that they inherently have some level of power or authority of over women? That perhaps if they can influence something as critical as a woman’s choice about her reproductive health, they may also have the right to arbitrate other important things like when a woman is choosing to have to sex with them versus when she just needs a little coaxing? Is that the lesson men like Bill Cosby, Bill Clinton, and Brett Kavanaugh somehow learned in their formative years that paved the way for adult behaviors like the sexual assaults they’ve been credibly accused of?

We teach boys not to cry because it shows weakness; we teach them in grammar school not to hit girls because they are weaker than they are; we teach them that aggression in sports brings victory and in life brings the spoils of success. But what are the specific examples we, as a society, are setting to ingrain in them the belief that women are thinking, feeling, intelligent beings who are their equals? Aside from Gillette’s flaccid attempt to shame men out of their lifelong inclinations toward toxic masculinity in an ad for their products, what values are we really instilling in our boys? While everyone has the right to his or her opinion on abortion, the question of whether or not someone has the right to intimidate or force a woman out of choosing one is a matter of law. And that answer, in most places in the US, is an unequivocal no.

While we’re talking to our boys about respecting their elders and not pulling little Sally’s hair in homeroom, let’s make sure we’re also teaching them the difference between having an opinion about women and respecting women’s legal and human rights.